Lathe machines have been around for centuries! Depending on the type of work to be performed, there are different types available. There are Multi Axis Lathes, Swiss Lathes, Vertical Turret Lathes, and Engine Lathes.

What is an Engine Lathe? An Engine Lathe is one of the oldest types of lathes and have been used since the 19th century.  They began being used in blacksmith shops. These lathes are best used for parts modification or individual part production.  They are not suited for repetitive production as they do not have any additional integral features for that type of job. Engine lathes are known for being easy to operate. Their gearbox contains multiple spindle speeds and also contains a carriage that supports the cutting tools.

Engine Lathes are primarily used to cut metal. They take the metal piece and turn it while using special cutting tools to form the desired shape. When they first became used, they were used with hand-held tools or only had a manual feed. Later on, they were created with an automatic feed to the cutting tool. The early model of the engine lathe had a spindle that had a multi-step pulley attached to it. You could change the spindle speeds by moving the flat belt to different steps on the multi-step pulley (also known as a cone pulley). Initially, the carriage used to trap dirt and dust. Fast-forward to today, and we have a self-oiling machine that has a carriage made to protect itself from getting debris trapped while cutting. These lathes also have a durable headstock to drive the machine at different speeds.

What are some manufacturers that sell Engine Lathes today? There are several manufactures that sell Engine Lathes. Some of the popular ones that are resold include Leblond, Clausing and Summit. Clausing has been around (like most of the manufactures) for over 100 years. They offer several manual Engine Lathes such as the 8115VSJ-Clausing/Colchester 21.81” swing over bed, 3 gear infinitely variable speed gap bed. These machines provide a stable flow of voltage by offering a three-phase voltage. (Three individual lines connect and run the voltage through the motor as they alternate in a sequence) Another popular manufacturer for Engine Lathes is Leblond. Leblond offers a new line of precision high-speed/heavy-duty Engine Lathes. This includes the RKL-1600, RKL-1800, and the RKL-2000. These machines have higher horsepower as well as a larger bearing surface than their traditional line of Engine Lathes. Lastly the company, Summit Machine Tool has been around as machine manufacturer since the early 1950’s. They build their Engine Lathes to withstand some of the most demanding jobs in the industry. Like most established machine manufacturers, they offer comprehensive after-sale support. Engine Lathes are built to last and are affordable when bought used! 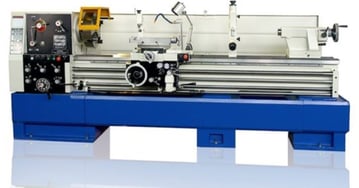 Revelation Machinery can always help you find what you need! If you have any questions about Engine Lathes or need to find a specific brand/type, please feel free to contact us! If you need to sell your used Engine Lathes, do so here

What Are Some Of The Main Types of Lathes?

One of the first lathe machines with a mechanical cutting tool and set of gears dates all the way back to the 1700's!  Fast forward to almost 2021 and we have some...

CNC Lathe machines are a huge part of the manufacturing industry and as technology advances, become even more essential in shops around the country. They are used for...